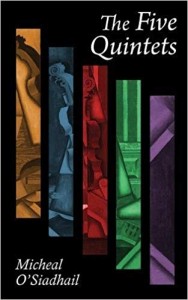 Praise for The Five Quintets:

“O’Siadhail’s book is an erudite, epic poem that covers four centuries of modern thought and sensibility. It ranges through the best that has been thought in the modern world and in well-crafted, inventive, poetic forms, while introducing major artists, poets, writers, musicians, scientists, philosophers and politicians. It is an engaging, delightful, and amazing tour de force. It is a book to be studied and taught and read. For poets, it is an inspiration.” – from the US Review of Books for receiving the Eric Hoffer Award for Academic Press, 2020

“An Epic Poet For Our Era” – Angela Alaimo O’Donnell in the Fall Literary Review 2019, issue of America Magazine

“Micheal O’Siadhail’s book-length poem, The Five Quintets, is the most important work of English-language literature that has been published so far this century” – Frank Armstrong in Cassandra Voices

“Not just a collection but a new cornice stone of civilization, Micheal O’Siadhail’s new collection The Five Quintets is dazzling in its achievement” – Cahir O’Doherty in The Irish Voice

“Micheal O’Siadhail, one of Ireland’s foremost poets, has produced a remarkable opus, The Five Quintets… Micheal O’Siadhail knows his economics and is able to identify quickly and in verse many of the conceptual breakthroughs of these great economic thinkers.” – Antoin Murphy in Finance Dublin

“For years I’ve been on then the lookout for contemporary poets as well-read as Eliot’s modernist, as ingenious as Emily Dickenson, as comprehensive as the metanarratives that inspire the songs of Antiquity.” – Jeremiah Webster in Presence